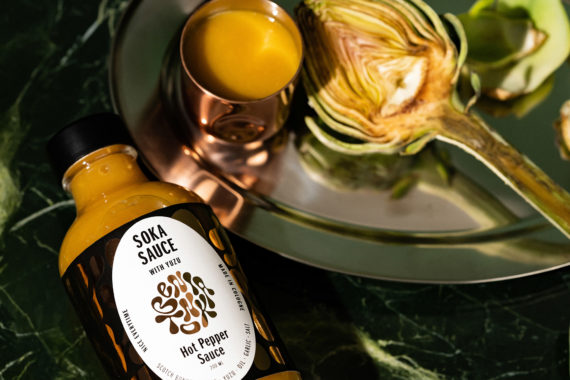 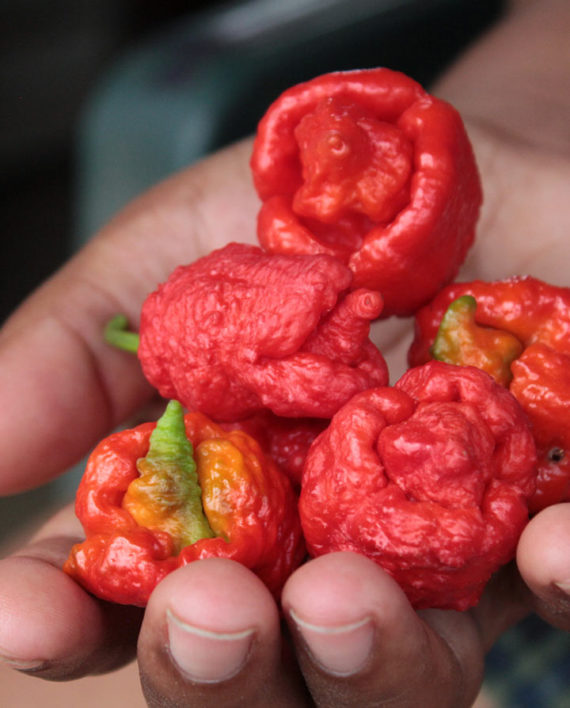 A special edition SOKA sauce with yuzu. The slow-growth citrus fruit, generally requires 10 years to fruit. Specially made for the traveller, the jet-setter and the adventurer. Full of vibe you can take anywhere and spice up anything — in-flight meals, street food, a snack at the Everest base camp or on a freeze-dried penne al arrabiata while in outer orbit. On Earth, the one with the sauce is boss!  Trinidadian proverb.

From the Caribbean, with love and Soka music in the air! Made in Cologne with my Trini Auntie’s blessing.

SOKA hot pepper sauce is inspired by the legendary sauce conjured up in my Aunt Cynthia’s Moruga kitchen. I had the honor of being her pupil over the years, helping her pick peppers from the garden in the trace, peering pointedly over her shoulder as she combines ingredients. She never measures, everything happens by feel. “Ah does average.” She’d say in her usual operatic voice. I’d hang onto every word as it rung through the kitchen, the corridor and ear canals of passersby.

Thirty generations ago, my African ancestors toiled under the hot sun, with little resources to support them. To fuel their work, they were issued the ‘undesirable’ cuts of meat by their captors — such as the feet, head, ribs, cartilage and internal organs. To hide the poor taste of these scraps and the monotony of their rations, they drew inspiration from what they could remember of their West African culinary tradition. They began in secret to take chili peppers to form a powerful concoction — pepper sauce — to invigorate their plates. These creations were later remixed through exchanges with surviving Kalinago and the delivery of East Indians following ex-slave boycotts after the official end of slavery. Eventually, I gleaned enough ancestral wisdom to begin my own journey into that special hotness.

Today, hot pepper sauce is as synonymous with Trinbago’s spirited cuisine as Soka (Soca) music and whine is to our spirited Carnival season. We want it for breakfast: saltfish and sada roti, smoked herring, plantains, baigan choka and dasheen bush; in snacks like pholourie, pineapple chow and tamarind balls; for lunch, on roti with curry mango; at a beach lime, it’s magic on bake and shark. Sunday’s, we need that heat to turn up pelau and callaloo, stew fish and provisions. And late nights after the fete, we’ll queue up behind dozens of other revelers for doubles with slight pepper.

What are you looking for?